Status: This version should be considered Beta quality and should not be included into release or release candidate games.

1. What is the GameBench Unity Package?

If upgrading from version 0.6.1 or older, you should first manually remove all GameBench files from your project assets. Versions before 0.7 were in the older ‘asset package’ format where GameBench code and plugins were imported/copied into your project. Build 0.7 onwards uses the newer Package Manager package form.

Unity 2018: Tarball packages aren’t supported in Unity 2018 so you will need to unpack the .tgz first and use “Add package from disk…” and browse to the package.json in the package root.

Unity 2019 and later: After the above steps your project manifest (Packages/manifest.json) will reference GameBench.tgz with an absolute file path. We recommend you manually edit the manifest file and change the GameBench entry to use a relative path, as per Unity documentation.

GameBench must be configured with some account details before use. This is easily done with the Editor UI which is accessed from “GameBench -> Configure” in the Unity menu: 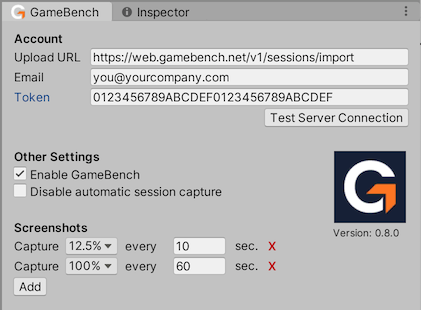 Screenshots are supported at a range of sizes: 100%, 50%, 25%, 12.5%, and 6.75%. The Editor UI lets you define up to 4 different captures at repeating intervals of your choosing. Screenshots may also be captured in script.

Not all GameBench config is exposed in the Editor UI. The full configuration is stored as JSON in the file Assets/Resources/GameBenchSDK/SDKConfig.txt. Here are the additional values that may be set using your favourite text editor:

When set, scene changes will be automatically recorded as marker events. Default is ‘true’.

This boolean flag is useful for troubleshooting, set it to ‘true’ for GameBench to log what it’s doing.

This is a map of metric names to their collection intervals, in seconds. Note that screenshots intervals are also stored here.

Tags are an unordered set of comma-delimited key=value string pairs that are useful for identifying sessions or groups of sessions in the Analysis area of the Web Dashboard.

GameBench can be used without writing any code at all. By default, performance data will be automatically captured from app launch until the app is backgrounded at which point the captured data will be uploaded. But if you need finer control over data capture - to limit it to particular scenes or events in your game, say - then GameBench offers full control through an API.

NB: Before using the API it is strongly recommended that you disable automatic capture via the option in the configuration UI (pictured above).

All APIs are static methods of the Gamebench class in the GamebenchLib.Runtime namespace. You do not need to instantiate anything.

All metrics may be captured at set intervals and/or with the CaptureNow() method.

Note that screenshots are a type of metric (see the SS values in the MetricType enum). To capture a screenshot at 50% the screen resolution you could write Gamebench.CaptureNow(MetricType.SS1).

Metric capture has very low overhead and is asynchronous, it should not affect your app’s observed performance.

NB: Markers for scene changes are recorded automatically by default.

All other configuration values are also settable in code. Note that these values set with these APIs are transient and do not persist beyond process exit.

Where ConfigItem is a value from the following enum in the same namespace as Gamebench:

GameBench performs very little dynamic allocation and it’s impact on RAM usage is reasonably constant at around ~200KB on both iOS and Android.

To measure the impact of GameBench on CPU and Power usage we profiled game demos on common devices to measure the difference once GameBench was enabled. Each game demo required no user input and therefore performed the same path each time, each ran a minimum of 3 times and for the same duration each time.

Screenshots can have a significant impact on session data sizes and upload times so GameBench screenshots use lossy JPEG compression to minimize this. For a typical smartphone with a ~3 megapixel screen a full-size capture will be saved at 50% JPEG quality and occupy roughly 100KB of storage. If you need very frequent screenshots we recommend using one of the reduced size capture options which need much less space.

A tiny minority of old phones running Android 5.0 will visibly stall when a screenshot is taken. The Samsung Galaxy S4 I-9500 running 5.0.1 in particular is especially bad for this. We hope to work around the bad driver behaviour that causes this in a future release.

The Huawei Honor 9 has been observed to occasionally reboot itself - indicating a kernel panic - within a minute of capturing a session including screenshots. We speculate that a combination of rarely-exercised paths in the Mali GPU driver and Huawei’s custom optimization service are to blame. We are investigating this issue in the hope of finding a satisfactory workaround.